This site uses cookies. By continuing to browse the site, you are agreeing to our use of cookies.

The spirit of TAKUMI

In 2020, the 60th anniversary of Grand Seiko’s creation, the proprietary Spring Drive mechanism took another step forward in the form of a next-generation movement, Caliber 9RA5/9RA2. It was the creation of expert technicians at the Shinshu Watch Studio, who have taken the Grand Seiko ideals of “accuracy, legibility and beauty” to a new higher level of perfection.
Caliber 9RA delivers an accuracy rate of ±10 seconds per month and, despite being slim, has a power reserve of 5 days. Furthermore, the movement’s appearance has been painstakingly finished to reflect both its quality and the area from which it comes. “The ideal we aimed for was to create the best Spring Drive movement,” says Eiichi Hiraya who was responsible for Caliber Caliber 9RA’s design at the Shinshu Watch Studio. He was very aware of the importance of the moment. Caliber 9RA5/9RA2 is one of the main springboards for the next 60 years of Grand Seiko and so was created to open a new chapter in its history.

The challenge of creating a next-generation Spring Drive movement

Caliber 9RA5/9RA2 incorporates several innovations, chief among which are the Dual-size Barrels. These two barrels are of different sizes to save space and achieve an extended power reserve. Caliber 9RA5/9RA2 also has a new date change mechanism that shortens the time taken for the date to change to half that of conventional mechanisms. The innovation with which Hiraya struggled most was the “high precision Spring Drive package IC,” which he wanted to create in order to achieve an accuracy rate of ±10 seconds per month. It is a new mechanism that encloses in a vacuum package an IC that controls the accuracy of the Spring Drive movement, a quartz oscillator, and the wiring that connects them.
“It took a great deal of time to find the optimum structure to enclose the IC and quartz oscillator, which until now had been mounted separately, in one vacuum package. Since the vacuum package cannot be opened once it is sealed, we naturally used a quartz oscillator with stable performance that was carefully selected by aging it for three months. It was also essential to maximize the accuracy of the SOI-IC, an IC that runs on an extremely small consumption current, and the wiring,” says Hiraya.
The quartz oscillator oscillates 32,768 times per second. Since the oscillation frequency is liable to change with variations in temperature, Grand Seiko’s quartz Caliber 9F has a temperature sensor within the IC that measures the temperature inside the watch 540 times per day, determines the effect of temperature based on that data and corrects any error. With Caliber 9RA5/9RA2 in contrast, the temperature sensor and quartz oscillator mounted inside the IC are sealed within the same vacuum package, eliminating the temperature differential between the two and minimizing the effect of external temperatures, allowing higher precision correction to be performed. Furthermore, the effect of humidity changes is held in check by containing the wiring that connects the IC and quartz oscillator within the package. The shielding also eliminates the potential effects of static electricity and other influences.
“In the development process we faced a new challenge. Incorporating the temperature correction function within the vacuum package meant that a separate source of power was required to activate the function and it had to be kept to 45nA, the same consumption current needed to operate a conventional IC. Under these tight restrictions, it took a lot of trial and error to find the optimum mechanism.”

Another major challenge for Hiraya was to slim down the movement. By making the movement thinner, the watch itself can be made slimmer and, by placing the center of gravity closer to the wrist, the watch is more comfortable to wear. The company’s Magic Lever system comprises a small number of parts and has excellent winding efficiency but a certain depth, due to fact that it moves in conjunction with the oscillating weight and is therefore positioned on top of the central part of the movement. For Caliber 9RA5/9RA2, however, an Offset Magic Lever was devised that moved the Magic Lever with its crank pillar in parallel, away from the center of the movement.

“By positioning the Magic Lever with crank wheel next to the central part and slimming down the oscillating weight and other components, we reduced the thickness of the movement by 0.8mm, from 5.8mm to 5.0mm. However, since the distance to the transmission wheel is naturally increased by moving the position of the Magic Lever, there was an issue with the slight reduction in winding efficiency. Taking advantage of the advanced cutting technology of the artisans at the Shinshu Watch Studio, we therefore created a new shape to crank the pillar of the Magic Lever, and moved the transmission wheel arrangement to be in parallel with the crank pillar; in doing so, we improved both the thinness and the winding efficiency.”
Thus, a slimmer profile was achieved through use of the Offset Magic Lever but meticulous attention was also paid to the center of gravity. The distance from the bottom face of the movement to the center of the crown was reduced from 4.2mm to 3.4mm, the position of the crown was moved as far as possible toward the case back and the center of gravity was lowered to provide a more stable fit on the wrist as well as to give the watch a slimmer profile. Caliber 9RA5/9RA2 was now thinner but it was vital that this did not compromise its robustness. To ensure the movement’s strength, Hiraya integrated together the first and second bridges and the winding stem cock, which had previously been in three parts, into the One-piece Center Bridge. 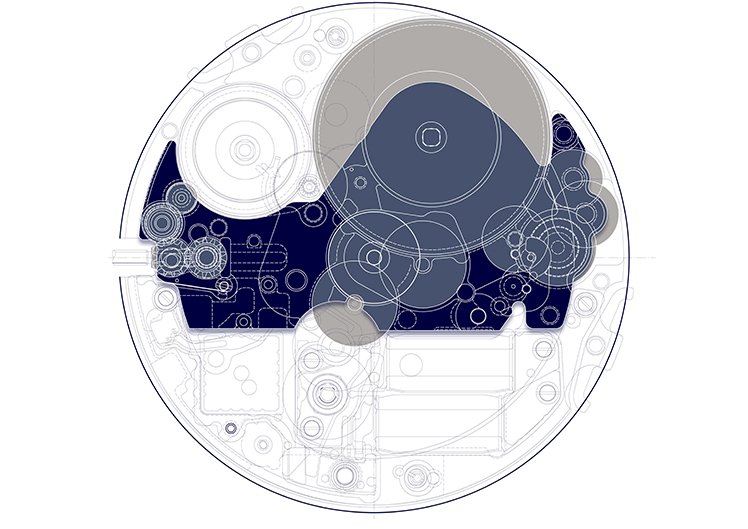 “We reinforced the 3 o’clock/9 o’clock direction, which is where the main plate is weaker than other parts and housed all the gear trains within this structure. In doing so, we greatly enhanced its robustness. Also, the integration of the three bridges, which had previously been separate components, eliminated variations in components and assembly and also contributed to enhanced transmission efficiency. All these innovations have made Caliber 9RA5/9RA2 a robust, slimmer movement with improved accuracy and I am proud of what we have achieved.”

A beautiful finish with a traditional Japanese aesthetic

The team at the Shinshu Watch Studio was determined that the exterior of the first watch with Caliber 9RA5/9RA2 should be as exceptional as the movement itself and they wanted it to reflect the beauty of the natural world in the area of Shiojiri where they live and work and where Spring Drive was invented. They chose a winter theme and were inspired by the hoarfrost-covered trees seen in the early days of winter and the star-speckled sky that they glimpse in the gaps between them. 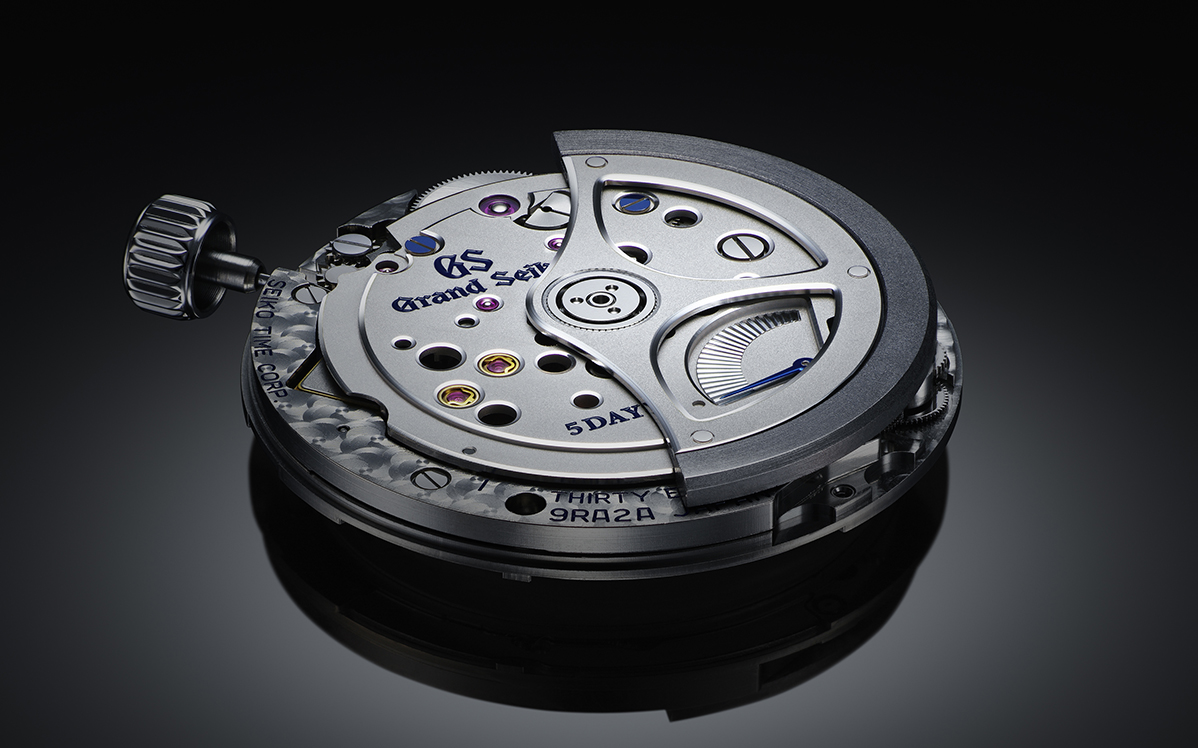 “Hoarfrost is characterized by an uneven texture peculiar to the ice layer and it has a sparkling radiance that I love to experience. It isn’t showy, and neither does it strongly assert itself but its understated charm has a unique beauty that makes you want to gaze at it forever. We applied a delicate finish processing to the bridge surface to incorporate that image into the movement. The bridge ridge lines, end pieces and hole edges on the other hand are diamond-cut, receiving and diffusely reflecting light from all angles and emitting a beautiful, sharp radiance, like stars shining in the night sky. The finish has a sharp radiance that Japan has cherished since times of old, typified by the traditional Japanese rock garden.”

A unique design philosophy that starts with “beautiful components”

In designing every Grand Seiko movement, Hiraya always has in mind the design philosophy that had been passed down the generations since the time of Suwa Seikosha. Their movements “should always be accurate, should not break, and should be beautiful”. “If we can design components that work well but also look beautiful, they will be easier to manufacture, which in turn will lead to higher precision. This is a fundamental lesson we learned from our predecessors. If the shape of a component is not beautiful, it will naturally be difficult for an artisan to make. Being difficult to make means that accuracy is difficult to produce and machining variations are liable to occur. When a structure becomes complicated, we endeavor to make improvements and refine it to remove waste and re-design it to be as beautiful and simple as possible. Designing components beautifully; it’s no exaggeration to say that this is a barometer that measures the accuracy of a movement and is what we have always endeavored to do. In the design of Caliber 9RA5/9RA2, I was even more careful and cautious than ever before.”
The Development and Design Department, of which Hiraya is a member, has created a database of the designs and technologies that the studio had developed over the years and has created an environment in which technical experts can share this knowledge. By visualizing the technologies and ideas developed by designers in the past, Hiraya and his colleagues can now obtain the information they need, when they need it. In addition, it has been built in order to pass on to each new generation the design assets that their predecessors accumulated. This inheritance is fundamental to the future of Grand Seiko, which pursues the Michi or the Way of continuous evolution. With access to the vital lessons of the past and with the creativity and new technologies that Caliber 9RA5/9RA2 demonstrates, Hiraya and his team will be able to develop new movements and designs that, like their predecessors, offer high accuracy and high durability and will continue to mark time beautifully long into the future. Every Grand Seiko should have an appeal that grows as the years pass and, with Caliber 9RA5/9RA2, Hiraya and the elite engineers at the Shinshu Watch Studio have created a masterpiece that will truly stand the test of time. As the seconds hand glides soundlessly and smoothly across the dial, it marks the beginning of a new era for Grand Seiko. 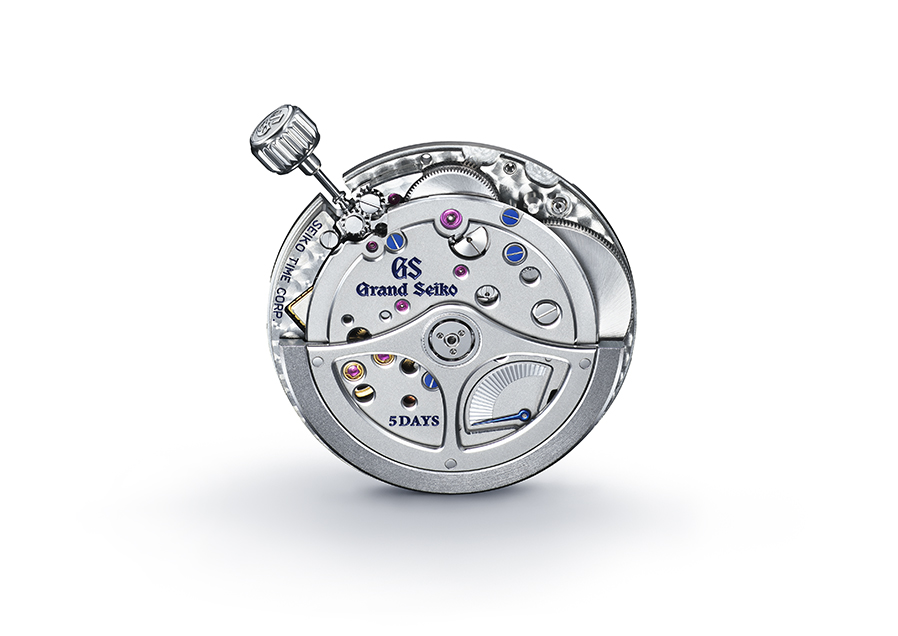